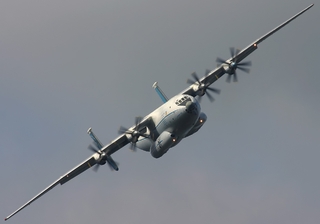 The Antonov An-22 is a Soviet heavy military transport aircraft designed during the first half of 60's. Powered by four turboprop engines each driving a pair of contra-rotating propellers, the design was the first Soviet wide-body aircraft and remains the world's largest turboprop-powered aircraft to date. After a first flight on 27 February 1965, the Antonov An-22 first appeared for public outside the Soviet Union at the 1965 Paris Air Show. Production line was closed in 1976 and a handfull airplanes are still operational.

This page lists all films that feature a variation of the Antonov An-22.

Pages in category "Antonov An-22"