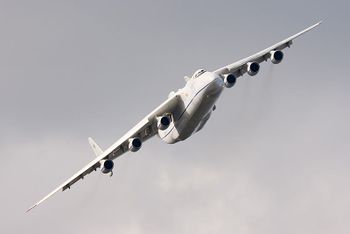 The Antonov An-225 Mriya, NATO reporting name: Cossack is a strategic airlift cargo aircraft, designed by the Soviet Union's Antonov Design Bureau in the 1980s. The An-225's name, Mriya (Мрiя) means "Dream" (Inspiration) in Ukrainian. It is the largest airplane in the world; it is the heaviest aircraft with a gross weight of 640 tonnes and the biggest heavier-than-air aircraft in terms of length and wingspan in operational service. The Antonov An-225, originally developed specifically to transport the Buran spaceplane, was an enlargement of the successful Antonov An-124. The first An-225 was completed in 1988 and a second An-225 has been partially completed. The completed An-225 is in commercial operation with Antonov Airlines carrying oversized payloads. Among its many records, it holds the absolute world record for airlifted payload at 189,980 kilograms (418,834 pounds).

This page lists all films that feature the Antonov An-225 Mriya.

Pages in category "Antonov An-225 Mriya"