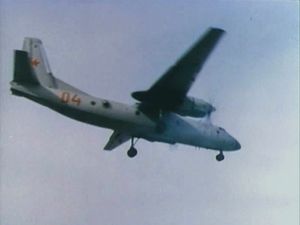 The Antonov An-26 (NATO reporting name: Curl) is a twin-engined turboprop civilian and military transport aircraft, designed and produced in the USSR in 1969–1985. After successful operations of the An-24T tactical transport in austere locations, interest in a version with a retractable cargo ramp increased. Initial studies for the retractable ramp were carried out as part of the projected An-40 medium transport. When given the go-ahead for the An-26 in March 1968 the Antonov OKB adapted the ramp design of the An-40 to the An-24 fuselage, thus was born the An-26. Particular attention was given to the military mission and the majority of early An-26 production was delivered to the VT-A.

This page lists all films that feature the Antonov An-26 .

Pages in category "Antonov An-26"

The following 28 pages are in this category, out of 28 total.