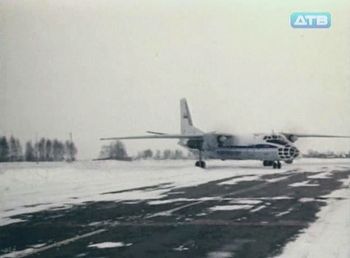 Antonov An-30 seen in Vint.

The Antonov An-30, is a development of the An-24 designed for aerial cartography , fitted with an entirely new fuselage forward of frame 11. The fuselage nose is extensively glazed, reminiscent of the Boeing B-29. Housed within the new nose section is the navigator and precise navigational equipment, including an optical sight for ensuring accuracy of aerial photography. As well as its principal use as a survey aircraft, it has also been used by Bulgaria, Czech Republic, Romania, Russia and Ukraine to carry out surveillance under the Open Skies Treaty. Between 1971 and 1980 total 115 aircraft were built and 23 were sold abroad to Afghanistan, Bulgaria, China, Cuba, Czechoslovakia, Mongolia and Vietnam.

This page lists all films that feature the Antonov An-30.

Pages in category "Antonov An-30"