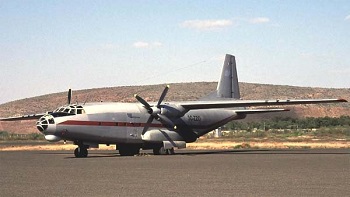 The Antonov An-8 (NATO reporting name: Camp) is a Soviet-designed twin-turboprop-engine high-wing light military transport aircraft. The first production aircraft was rolled out in December 1958 incorporating de-rated AI-20D engines, (the initial production AI-20D was found to be incapable of delivering the specified power), modified undercarriage control system, fuel vents, pressurization and de-icing system, as well as thicker gauge skin in the propeller plane of rotation and increased rudder range of movement. The majority of An-8s built served in the Soviet Air Forces, with two An-8s being used to land special forces to seize Plzeň airport during the Invasion of Czechoslovakia in 1968. Others were used as electronic reconnaissance aircraft, and one aircraft was used for air sampling following Chinese nuclear testing in 1966. They continued in large scale use on front-line military duties in the Soviet Air Force until the 1970s, when many were later transferred to Aeroflot for use as freighters. Following a series of accidents in the early 1990s, the An-8 was withdrawn from use in Russia. This did not mean the end of the An-8, however, as a number were sold overseas with a few aircraft observed flying in Africa, particularly Liberia and Angola, and the Middle East (particularly airlines associated with the Russian Businessman and alleged arms dealer Viktor Bout despite Antonov having withdrawn the airworthiness certificate and support for the type in 2004, ending legal use of the aircraft.

This page lists all films, TV series, and video games that feature the Antonov An--8.

Pages in category "Antonov An-8"