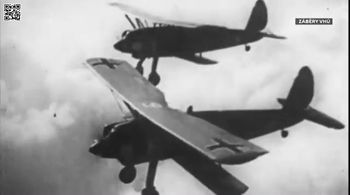 The Arado Ar 68 was a German single-seat biplane fighter intended to replace to Heinkel He 51. As the first official fighter of the new Luftwaffe (when Germany left the Treaty of Versailles), it plays a important interim role before the Messerschmitt Bf 109 reaches the operational units. Some of them were sent in Spain with limited success (despite this, the surviving airframes were still in use by Ejército del Aire (Spanish Air Force from 1939) when World War Two was over). In Germany, the type was mainly relagated to flying school after 1937 and as and when the Bf 109 took over the task. A handle of the Arado were used as nightfighters during the first winter of the war.

The production reached an end with the 511th aircraft.

This page contains all films, TV series, and video games that feature the Arado Ar 68.