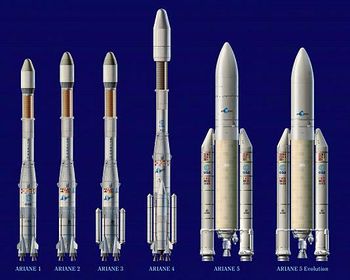 Ariane is a series of European civilian expendable launch vehicles for space launch use. The name comes from the French spelling of the mythological character Ariadne. France first proposed the Ariane project and it was officially agreed upon at the end of 1973 after discussions between France, Germany and the UK. The project was Western Europe's second attempt to develop its own launcher following the unsuccessful Europa project. The Ariane project was code-named L3S (the French abbreviation for third-generation substitution launcher).

The European Space Agency (ESA) charged Airbus Defence and Space with the development of all Ariane launchers and of the testing facilities, while Arianespace, a 32.5% CNES (French government space agency) commercial subsidiary created in 1980, handles production, operations and marketing. Arianespace launches Ariane rockets from the Guiana Space Centre at Kourou in French Guiana.

This page contains all films, TV series, and video games that feature the Ariane rocket family.