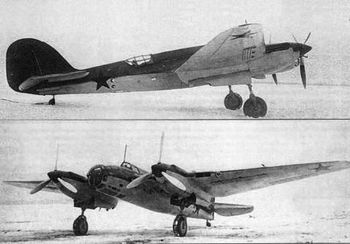 The Arkhangelsky Ar-2 was a Soviet dive-bomber used in small numbers during World War II. Its design was a refinement of the earlier Russian Tupolev SB. Beginning in 1940, Ar-2s were assigned to units already operating the SB, and the two types were operated side-by-side. At least half of all Ar-2s built were destroyed during the German offensive of 1941, with a small number still operating until about 1943. About 190 have been built.

This page lists all films that feature a variation of the Arkhangelsky Ar-2.