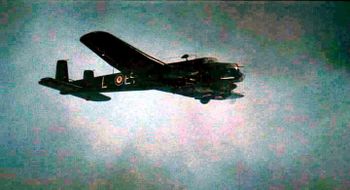 The Armstrong Whitworth A.W.38 Whitley was a twin-engine, front line medium bomber in service with the Royal Air Force at the outbreak of the Second World War. It took part in the first RAF bombing raid on German territory and remained an integral part of the early British bomber offensive until the introduction of four-engined "heavies". Its front line service included performing maritime reconnaissance duties with Coastal Command, while also being employed in the second line roles of glider-tug, trainer and transport aircraft. Over 1800 were produced.

This page lists all films that feature a variation of the Armstrong Whitworth A.W.38 Whitley.