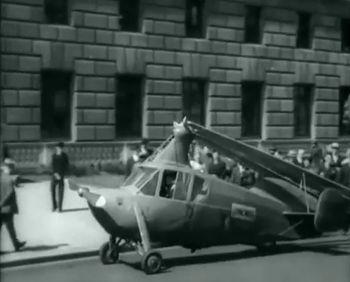 Autogiro Company of America AC-35 seen in The Conquest of the Air.

The AC-35 was an autogyro developed in the United States in the mid 1930s by Autogiro Company of America (a subsidiary of Pitcairn Aircraft Company), with the goal to design a roadable flying machine. This was a request by the Bureau of Air Commerce and this design was the only of six to reach the flying test and successfully achieved them. Despite great publicity in 1936 and extended experiment (until 1942), the autogira never enter production. The single airframe built is now part of the Smithsonian Institution.
License rights were bought in 1961 by Skyway Engineering Company. Inc and one airframe was built but the company didn't lasted enough for further production.

This page lists all films that feature the Autogiro Company of America AC-35.