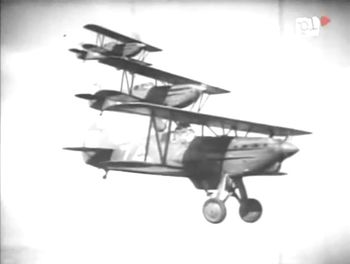 The Avia B-534 was a Czechoslovak fighter biplane with a fixed landing gear. Its high performances for the first half of the thirties led to a mass production. The abrupt partition of Czechoslovakia in 1939 prevented the use of the B-534 in combat by the nation that had produced it. Then, most of the planes were used as trainer by the Luftwaffe or sold to their allies (for exemple, Bulgaria bought several dozens in 1939) and saw limited fights.

This page lists all films that feature a variation of the Avia B-534.