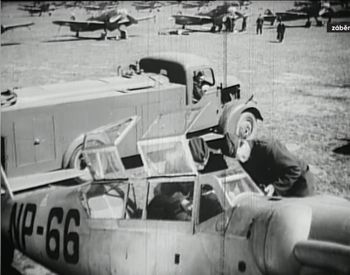 The Czechoslovak manufacturer Avia was seized by German in March 1939 and used to manufacture their aircraft ending the line with Messerschmitt Bf 109G-6s. Once the Third Czechoslovak Republic emerged in 1945, the need to build an Air Force from nothing led to do with what was on site : airframes and engines let by retreating German troops. Avia re-birth was the fruit of these spread part assembly : the S-99 (a Messerschmitt Bf 109 G with its DB605 engine). Only forty airframes left the factory before the lack of the DB605 powerplant. Thus leading Avia to use in 1947 another stock of available engine : the Junkers Jumo 211F (mostly used on Heinkel HE 111 H-11 and later variants). The airframe lost some speed and the axial cannon. The new aircraft was used by Czechoslovakia (for ten years) and Israel (phased out in 1950).

This page lists all films that feature a variation of the Avia S-199 and the two-seat training CS-199.