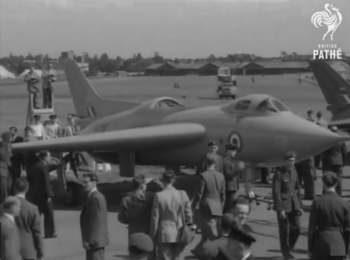 Avro 707B in The Farnborough Tragedy.

The Avro 707 (also known as Type 707) was a British experimental aircraft built to test the tailless thick delta wing configuration chosen for the Avro 698 jet bomber, later named the Vulcan. In particular, the low-speed characteristics of such aircraft were not well known at the time. Aerodynamically, it was a ⅓-scale version of the Vulcan.

The 707 was a "proof-of-concept" delta design that was principally the work of Stuart D. Davies, Avro chief designer. The diminutive experimental aircraft initially incorporated a wing with about 50° sweep, without a horizontal tail on a fin with trailing edge sweep. The trailing edge of the wing carried two pairs of control surfaces: inboard elevators and outboard ailerons. Retractable airbrakes were provided above and below the wings. The prototypes were ordered by the Ministry of Supply to Specification E.15/48. The aircraft were produced quickly using a few components from other aircraft including the first prototype using a Gloster Meteor canopy. The 707 programme provided valuable insights into the Vulcan's flight characteristics, most of the information coming from the second and third prototypes which flew before the Vulcan. All 707s were powered by a single Rolls-Royce Derwent centrifugal turbojet. The air intake on the first prototype and later 707B was located on the upper rear fuselage. Five 707s were built altogether.

This page contains all films, TV series, and video games that feature the Avro 707.