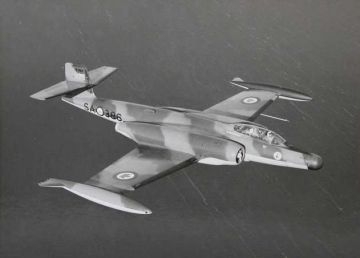 The Avro Canada CF-100 Canuck was a Canadian jet interceptor/fighter serving between 1952 and 1981. The two-seat fighter crewed by a pilot and navigator was designed with two powerful engines and an advanced radar and fire control system housed in its nose that enabled it to fly in all-weather or night conditions. Despite good performance in 1950, it was quickly outdated by lots of single seat fighter on handling, then by the next generation when aircraft of such class were able to carry a radar manned by the sole pilot. Used by RCAF under the NORAD command and in Europe, it was for some time the only NATO fighters capable of operating in zero visibility and poor weather conditions. Fifty-three of them were ordered and used by Belgian Air Force.

This page lists all films that feature a variation of the Avro Canada CF-100 Canuck.