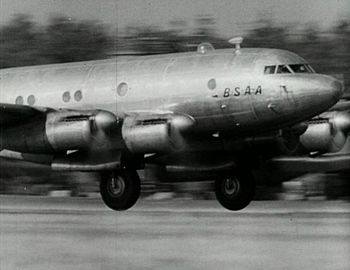 The Avro Type 688 Tudor was a British piston-engined airliner based on the four-engine Lincoln bomber. It was Britain's first pressurized airliner. Despite having a reasonably long range, the tailwheel undercarriage layout was a disadvantage and most customers preferred buying unpressurized DC-4s or Constellations. Several variants were studied, some under the model type 689 but only 38 were built of all types.

This page lists all films that feature a variation of the Avro Tudor.