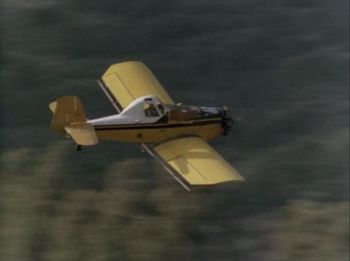 The Ayres Thrush, formerly the Snow S-2, the Aero Commander Ag Commander and the Rockwell Thrush Commander, is an American low-wing agricultural aircraft produced by Ayres Corporation. It is one of the most successful and long-lived agricultural application aircraft types in the world, with almost 2,000 sold since the first example flew 56 years ago. Typical of agricultural aircraft, it is a single-seat monoplane of conventional taildragger configuration. Originally powered by a radial piston engine, most examples produced since the 1980s have been turboprop-powered.

This page lists all films that feature the Ayres Thrush.