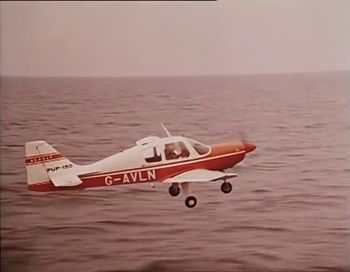 Beagle B.121 Pup Series 2 seen in The Body Stealers.

The Beagle B.121 Pup made its first flight on 8 April 1967. It's a British 2-4 seat single-engined training and touring aircraft built in three main variants, depending the power of the engine. A military version of the Pup was developed as the Beagle B.125 Bulldog. Only one prototype aircraft was built by Beagle before it ceased operations; the design and production was taken over by Scottish Aviation.

This page lists all films that feature a variation of the Beagle B.121 Pup.