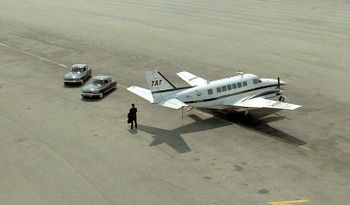 The Beechcraft 99 is a civilian aircraft designed in the 1960s as a replacement for the Beechcraft Model 18. It is a twin-engined, unpressurized, 17-seat/15 passenger turboprop aircraft, derived from earlier Beechcraft King Air and Queen Air: using the wings of the Queen Air; the engines and nacelles of the King Air; sub-systems from both and a unique nose structure used only on the 99. Some improved versions and variants have been produced as 99 Commuter and 99 Executive. Since 1984, it was replaced by the Beechcraft 1900, a pressurized 19-passenger airplane and produced till 1986.

This page lists all films that feature a variation of the Beechcraft 99 Airliner.