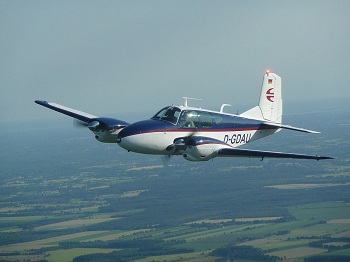 The Beechcraft Model 95 Travel Air is a twin-engine development of the Beechcraft Bonanza. Designed as a competitor to the Cessna 310 and the Piper PA-23, the Travel Air (developed as the Badger) took many design features from previous Beechcraft airplanes. It took its basic design from the Model 35 Bonanza, fitted with the vertical stabilizer from the T-34 Mentor, and two four-cylinder engines. Its wing spar was borrowed from the large Model 50 Twin Bonanza, along with thicker gauge aluminum on the leading edge; landing gear systems had been taken from the United States Navy Mentor, which was a stronger structure built for aircraft carrier landings. Power came from, in the 1958 model year, two Lycoming O-360-A1A at 180 horsepower (130 kW) at 2700 rpm each. With 75% power, the Travel Air was capable of 200 mph at 7,500 ft. 720 were built.

This page lists all films, TV series, and video games that feature the Beechcraft Travel Air.