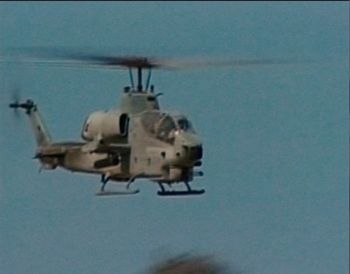 Bell AH-1W SuperCobra in The Men Who Stare at Goats.

The AH-1 SuperCobra is an improved, twin-engined attack helicopter based on the AH-1 Cobra used by the US Army. The family of helicopter consists of the AH-1J SeaCobra also the International export designation, the AH-1T Improved SeaCobra and the AH-1W SuperCobra currently used by the United States Marine Corps.
Must not be confused with the Bell AH-1Z Viper.

This page lists all films that feature a variation of the AH-1 SuperCobra. For the single engined variant, see Bell AH-1 Cobra.