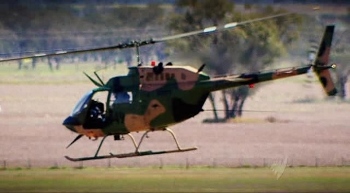 Bell OH-58A Kiowa in Top Gear Australia.
The Bell OH-58 Kiowa is a military scout helicopter developed from the Bell 206A JetRanger. Its first flight occurred on 10 January 1966, and it entered service with the US Army in 1969. Since then the Kiowa has been exported to a number of other countries, including Australia, Canada, Saudi Arabia, and Taiwan. The latest model, known as the OH-58D Kiowa Warrior, is powered by a single Rolls-Royce T703 engine and has two pylons upon which machine guns, rockets, or missiles can be mounted, giving it the ability to provide air support to ground troops. Over 2,200 OH-58s have been built.

This page lists all movies, TV shows, and video games that feature a variation of the Bell OH-58 Kiowa.