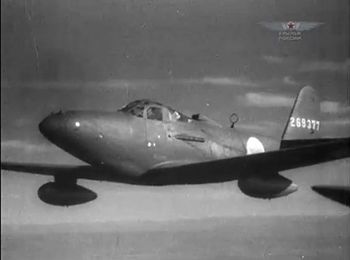 The Bell P-63 Kingcobra was an American single engine fighter derivated from the Bell P-39 Airacobra. If a four-bladed propeller (instead three blades for the P-39) and a distinctive tail are the main visible differences, the main upgrade was the new wing with its laminor airfoil. USAAF didn't used it at combat but most of the production found its way to the Soviet Air Force which made great use of them from 1944. The other main user was the French Air Force which has had 114 airframes mainly used during the Indochina conflict.

Most of the 3 300 P-63 built were -A and -C variants, the second one easily recognized by its bubble canopy.

This page lists all films that feature a variation of the Bell P-63 Kingcobra.