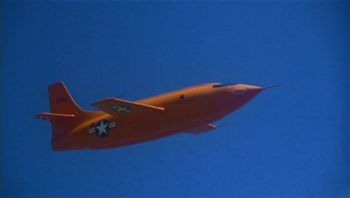 The Bell X-1, originally designated XS-1, was a joint NACA-U.S. Army/U.S. Air Force supersonic research project built by Bell Aircraft. It was the first aircraft to exceed the speed of sound in controlled, level flight, and was the first of the so-called X-planes, an American series of experimental aircraft designated for testing of new technologies and usually kept highly secret.

This page lists all films that feature a variation of the Bell X-1.