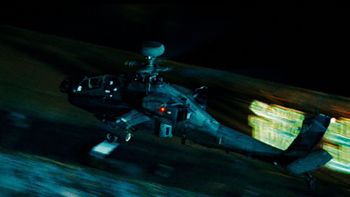 AH-64 Apache Longbow used in Transformers: Revenge of the Fallen.

The AH-64 Apache, originally designed by Hughes Helicopters and with McDonnell Douglas being the major manufacturer (after taking over Hughes), is a twin-engined, four-bladed combat attack helicopter. Now produced by Boeing as the advanced Apache Longbow, the aircraft features an extensive sensor suite for target acquisition and a range of armaments for attack. As well as being used extensively by the U.S. Army, the aircraft is also operated by Israel, Japan and the Netherlands, and by UK as the AgustaWestland Apache - a license produced variant.

This page lists all films that feature a variation of the Boeing AH-64 Apache Longbow.