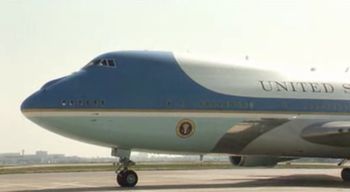 The Boeing VC-25, a heavily modified Boeing 747-200B, is a VIP transportation aircraft of the of the United States Air Force. Currently only two such aircraft exist, designated VC-25A, as the primary transport for the President of the United States and carry the registrations SAM (Special Air Mission) 28000 and 29000. 'Air Force One', the presidential callsign, has become the common name for the distinctive aircraft and its iconic symbol means it features regularly in productions as a symbol of the Presidency.

This page lists all films that feature the Boeing VC-25. A more comprehensive list including productions featuring a representation of 'Air Force One' can be found at Frequently Seen Aircraft.