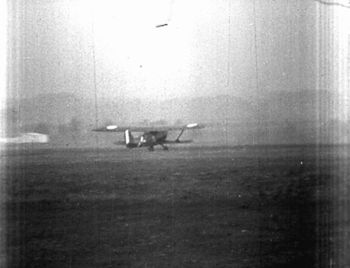 The Breguet 19 was a light bomber and reconnaissance plane, also used for long-distance flights, designed by the French Breguet company and produced from 1924. The first 11 Breguet 19 prototypes were powered by a number of different engines. A "trademark" of Breguet was the wide usage of duralumin as a construction material, instead of steel or wood. At that time, the aircraft was faster than other bombers, and even some fighter aircraft. Therefore, it met with a huge interest in the world, strengthened by its sporting successes. Mass production, for the Aéronautique Militaire and export, started in France in 1924. Both standard and modified Breguet 19s were used for numerous record-breaking flights. Many crews made long-distance flights in Br.19s. The most famous was the TR Super Bidon Point d’interrogation making the first non-stop east-west crossing by a fixed-wing aircraft of the North Atlantic, the 1-2 september 1930.

This page lists all films that feature the Breguet 19.