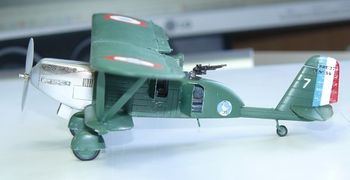 The Breguet 27 is a French family of sesquiplane military reconnaissance aircraft which prototype made its first flight on 23 February 1929. The main variant was powered by a 500 Hp Hispano-Suiza 12Hb inline engine. Another mark was the subtype 271 with a more powerfull Hispano-Suiza and a handle of airframe were built as prototype of unsuccessfull commercial variant, two of them being pulled by a radial Gnome-Rhône engine. The design of this wide single-engine aircraft (wingspan of 17 meters -more than 55 feet- versus usually 10 meters/32 feet for a fighter like the Bf 109, the D.520 or the Hurricane) was unusual the fuselage ending by a boom carrying the the empennage : so the rear gunner could fire with a minimum dead angle.

Around 150 airframes have been built, several dozens being rebuilt in more powerfull variant or as Limousine for liaison duties (with a close cabin).

This page lists all films that feature a variation of the Breguet 27.