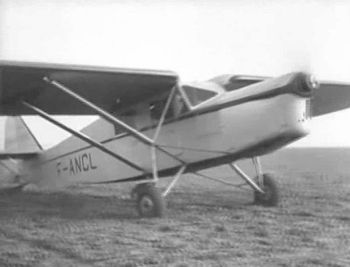 Last variant of the family, this Caudron C.410 is seen in Anne-Marie.

The Caudron C.280 family was a French civil utility aircraft built during the 1930s. It was a high-wing braced monoplane of conventional configuration with fixed tailskid undercarriage powered by inline engines, mainly from Renault or de Havilland. The pilot and two-three passengers were accommodated within an enclosed cabin. Christened Phalène or Super Phalène for C.282 and C.286 variants, the ultimate ones were of the C.289 series for a grand total of 240 airframes. Air Force ordered fifty aircrafts of the C.400 and C.410 series of which some were eventually put under civilian registry.

This page lists all films that feature a variation of the Caudron C.280 family.