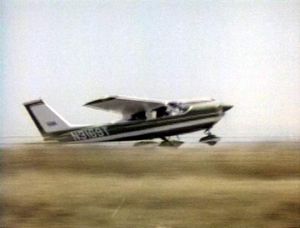 The Cessna 177 Cardinal is a light, high-wing general aviation aircraft produced from 1968 to 1978. It was designed in the mid-1960s when the engineers at Cessna were asked to create a "futuristic 1970s successor to the Cessna 172". The resulting aircraft featured newer technology such as a cantilever wing with a laminar flow airfoil.

More than 1,500 Cessna 177 were delivered including those built in France by Reims Aviation, as the Reims F177RG.

This page lists all films that feature a variation of the Cessna 177 Cardinal.