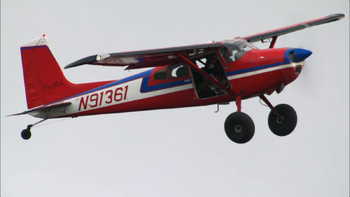 The Cessna 180 is a four- or six-seat, fixed conventional gear general aviation airplane which was produced between 1953 and 1981. Though the design is no longer in production, many of these aircraft are still in use as personal aircraft and in utility roles such as bush flying. Cessna introduced the heavier and more powerful 180 as a complement to the Cessna 170. It eventually came to be known as the Skywagon. In all its versions, 6,193 Cessna 180s were manufactured. In 1956, a tricycle gear version of this design was introduced as the Cessna 182, which came to bear the name Skylane. Additionally, in 1960, Cessna introduced a heavier, more powerful sibling to the 180, the conventional gear Cessna 185. For a time, all three versions of the design were in production.

This page lists all films that feature the Cessna 180.