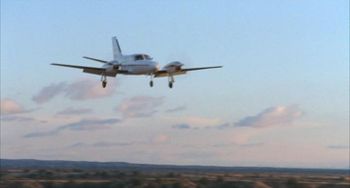 The Cessna 425, originally known as Corsair and later Conquest I, is a pressurized, turboprop airplane certified for eight occupants but usually configured to seat six. As a response of the Beechcraft King Air domination in this segment, it filled the gap in Cessna range between the Cessna 441 Conquest and the Cessna 421 from whom it was developed.

This page lists all films that feature the Cessna 425.