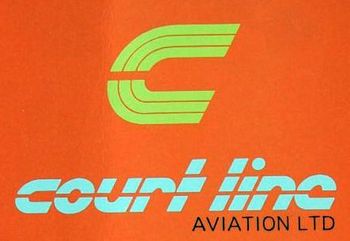 Court Line - a shipping company that could trace its history back to 1905 - purchased in April 1965 Autair International Airways, an airline born in 1960 as a division of Autair Helicopters, a helicopter operator established in the early 1950s. The airline changed its name on January 1970 to Court Line Aviation and introduced a new corporate look and strategy that focused exclusively on the then fast-growing package holiday market. The corporate look was an all-over colour design by Peter Murdoch. In keeping with the holiday "feel-good factor", BAC One-Eleven of the company were painted in the following distinctive, eye-catching pastel colour combinations: yellow/gold/orange, pink/rose/magenta, pale violet/mauve/purple, light green/mid-green/forest green. These were named Halcyon Skies. Aircrew wore trendy uniforms designed by Mary Quant. This was part of making passengers feel that the flight was a "fun part" of their holiday. Other airlines and tour operators were quick to jump on the burgeoning package holiday bandwagon. This resulted in increasingly fierce competition between operators and led to a price warfare to fill planes and hotels. The company went bankrupt on August 1974.

This page lists all films, TV series, and video games that feature aircraft of Court Line.