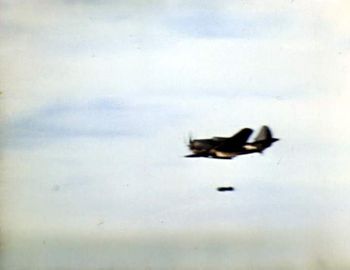 The Curtiss SB2C Helldiver first flew on 18 december 1940. Think to replace the Douglas SBD Dauntless, the plane suffured long delays during their trials, seeing combat action eventually in november 1943. Until the -3 version, the Helldiver was underpowered and experienced lot of failure and defaults. But then, a more powerful R-2600-20 Twin Cyclone and a four blade solved some of the problems but not enough for the british who never used it in front line despite their 450 aircraft ordered.
The A-25, a Army version for 900 planes, knew the same fate. Except the Navy, the Helldiver saw action in the Greek Civil War and with the french Aéronautique Navale ("french FAA") in Indochina until 1954.

A total of 7 140 aircraft were built in all versions until the end of WW2; the last one flew operationaly in 1959.

This page lists all films that feature a variation of the Curtiss SB2C Helldiver.