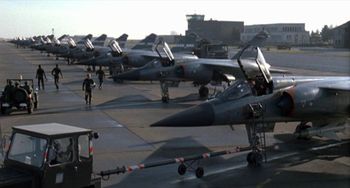 The Dassault Mirage F1 is a French air-superiority fighter and attack aircraft designed and built by Dassault Aviation as a successor of the Mirage III family. The Mirage F1 entered service in the French Air Force (Armée de l'Air) in the early seventies. Powered by a single SNECMA Atar turbojet, the F1 has been used as a light multipurpose fighter and has been exported to about a dozen nations. More than 700 F1s have been produced. Among the third generation European supersonic fighter (i.e. among those built in the sixties and early seventies) the F1 was the most successful, most significantly because almost all of its users have used it in wars and regional conflicts.

This page lists all films that feature a variation of the Dassault Mirage F1.