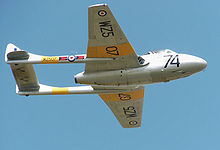 The de Havilland DH.100 Vampire was a British jet-powered fighter developed during WWII.It was the second jet fighter to enter service with the RAF after the war. The Vampire served with many air forces worldwide, setting aviation firsts and records.Almost 3,300 Vampires were built, a quarter of them under licence in other countries. The Vampire design was also developed into the de Havilland Venom fighter-bomber as well as naval Sea Vampire variants.

This page lists all films that feature a variation of the de Havilland DH100 Vampire.