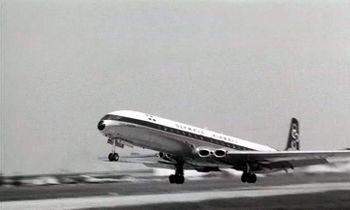 The de Havilland DH106 Comet is a four-engined turbojet airliner first introduced in 1952. It was the world's first commercial jet airliner to enter production and featured many revolutionary aeronautical designs. The initial success however was countered by a series of accidents attributed to fatigue in the airframe, but after extensive redesign it continued in service until 1997. The Comet also saw military service, most notably as the Hawker Siddeley Nimrod.

This page lists all films that feature a variation of the de Havilland DH106 Comet.

The following 84 pages are in this category, out of 84 total.