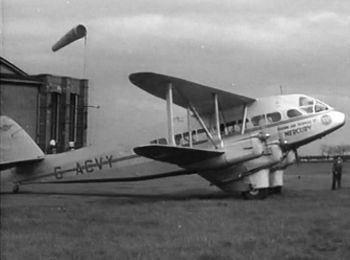 The de Havilland Express was a four-engined passenger aircraft from the 1930s manufactured by the de Havilland Aircraft Company. The D.H.86 was conceptually a four-engined enlargement of the successful de Havilland Dragon, but of more streamlined appearance with tapered wings and extensive use of metal fairings around struts and undercarriage. The prototype D.H.86 first flew on 14 January 1934, but was promptly redesigned with a dual-pilot nose. Investigations in 1936 following a series of fatal crashes resulted in late production aircraft being built with additional fin area in the shape of vertical "Zulu Shield" extensions to the tail planes to improve lateral stability - these aircraft were designated D.H.86Bs. A total of 62 D.H.86s of all types were built. Most of those still flying in Europe at start of World War II, except for the Railway Air Services aircraft, were taken into military service, mostly for communications and radio navigational training. A few Expresses survived the war and were used by UK air charter operators until the last example was burnt out in 1958.

This page lists all films that feature a variation of the De Havilland DH86 Express.