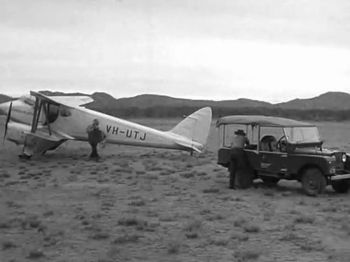 The De Havilland DH90 Dragonfly was a British biplane four seats airliner which made its maiden flight one year after the slighty bigger de Havilland DH89 Dragon Rapide. Sharing the same shape, the Dragonfly could be identified by their wings closer to the cockpit (which have the inverted V strut over its engines instead two masts for the DH89). If some airframes were sold to foreign countries (Sweden, Denmark, Canada, ...) most were bought by wealthy private individuals but made a commercial career in a second life on the edge of World War Two. From 1939, at least two dozens were pressed into Air Forces (as training or liaison aircraft) and few of them survived the war.

This page lists all films that feature a variation of the De Havilland DH90 Dragonfly.