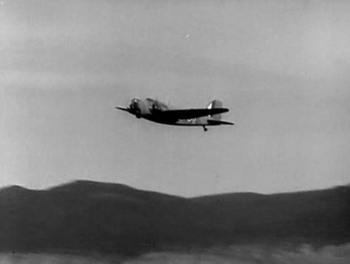 The Douglas B-18 Bolo was built by Douglas Aircraft Company and based on its DC-2, with several modifications. The wingspan was 4.5 ft (1.4 m) greater. The fuselage was deeper, to better accommodate bombs and the six-member crew; the wings were fixed in the middle of the cross-section rather than to the bottom, but this was due to the deeper fuselage.
USA, Canada and Brazil were the three countries which used the Bolo but nearly never on combat as it was quickly dedicated to maritime patrol, transport and training duties from the beginning of 1942. The last operational one was phased out in Brazil in 1946.

When the production finally ended, a total of 350 had been built by Douglas.

This page lists all films that feature a variation of the Douglas B-18 Bolo.

Pages in category "Douglas B-18 Bolo"