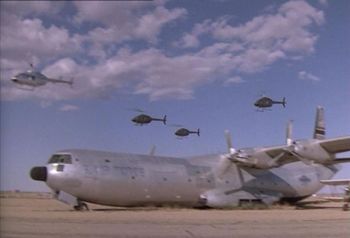 The Douglas C-133 Cargomaster was a large cargo aircraft built between 1956 and 1961 by the Douglas Aircraft Company for use with the United States Air Force. The C-133 was the USAF's only production turboprop-powered strategic airlifter, entering service shortly after Lockheed's better known C-130 Hercules, which was known as a tactical airlifter. It provided airlift services in a wide range of applications, being replaced by the C-5 Galaxy in the early 1970s. Fifty aircraft were built and operated by the USAF Military Air Tranport Service (MATS) and the Military Airlift Command (MAC).

This page lists all films that feature a variation of the Douglas C-133 Cargomaster.