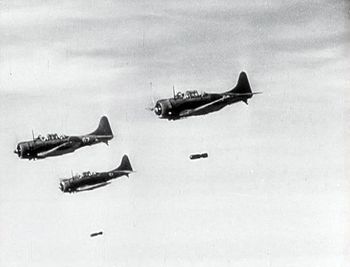 Douglas SBD-1 Dauntless seen in From Here to Eternity and Faces of Death.

The Douglas SBD Dauntless was a naval dive bomber made by Douglas during World War II. The SBD was the United States Navy's main dive bomber from mid-1940 until late 1943, when it was largely replaced by the SB2C Helldiver. The aircraft was also operated by the United States Army as the A-24 Banshee. Although relatively slow and outmoded when it began its combat career, it was rugged and dependable and sank more Japanese shipping than any other aircraft during World War II. Almost 6000 aircraft were produced and operated by USAAF, US Marine Corps, US Navy, RAF, Royal Navy, RNZAF, French Aéronavale and Armée de l’Air.

This page lists all films that feature the Douglas SBD Dauntless.