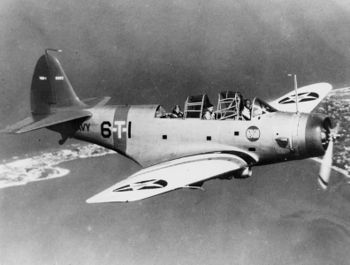 The Douglas TBD Devastator was a torpedo bomber of the United States Navy, ordered in 1934, first flying in 1935 and entering service in 1937. At that point, it was the most advanced aircraft flying for the USN and possibly for any navy in the world. However, the fast pace of aircraft development caught up with it, and by the time of the Japanese attack on Pearl Harbor the TBD was already outdated. It performed well in some early battles, but in the Battle of Midway the Devastators launched against the Japanese fleet were almost totally wiped out. The type was immediately withdrawn from front line service, replaced by the Grumman TBF Avenger. Only 130 aircraft bulit.

This page lists all films that feature the Douglas TBD Devastator.