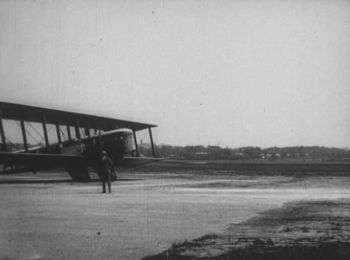 Farman F.60 Goliath seen in The Imperial Airway - The Work of the British Airways.

The Farman F.60 Goliath was a French airliner initially designed in 1918 as a heavy bomber capable of carrying 1,000 kg of bombs with a range of 1,500 km. It was undergoing initial testing when World War I came to end and Farman realized there would be no orders for his design. Nonetheless he was quick to understand that the big, box-like, fuselage of the Goliath could be easily modified to convert the aircraft into an airliner. Commercial aviation was beginning to appear and was in need of purpose-built aircraft. With the new passenger cabin arrangement, the Goliath could carry up to 12 or 14 passengers. It had large windows to give the passengers a view of the surroundings. Approximately 60 F.60 Goliaths were built. Between 1927 and 1929, eight Goliaths with various engines were built under licence in Czechoslovakia, four by Avia and four by Letov.

This page lists all films that feature a variation of the Farman F.60 Goliath.