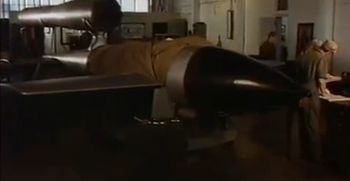 Fieseler Fi 103 seen in Enola Gay: The Men, the Mission, the Atomic Bomb.

The Fieseler Fi 103 was a german pulse-jet-powered missile. Developed at Peenemünde Army Research Center for the Luftwaffe, it was built by the Fieseler company. A manned variant was tested as Fieseler Fi 103R (nicknamed Reichenberg) but was never used in operations. After the war, several countries built copies for test purposes and further development. Also known as :

This page lists all films that feature a variation of the Fieseler Fi 103.