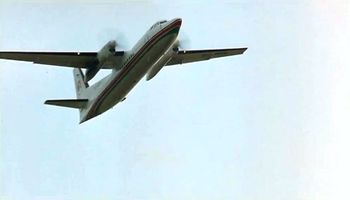 The Fokker 50 is a turboprop-powered airliner, designed as a refinement of and successor to the highly successful Fokker F27 Friendship. The Fokker 60 is a stretched freighter version of the Fokker 50. Both aircraft were built by Fokker in the Netherlands. The Fokker 50 was based on the stretched F27-500 airframe, but with a larger number of smaller windows in the fuselage and a two-wheel nose gear. Basic construction of the fuselage, wings and empennage (tail) remained unchanged apart from strengthening the various sections where required. The wing was equipped with upturned ailerons and wingtips, effectively acting as wing endplates or winglets. The major design change from the Fokker F27 was in the engines, and in equipping the aircraft with an electronic flight and engine-management system. The original Rolls-Royce Darts in various marks of basically 1,268-1715 kW (1,700-2,300 hp) was replaced with two more fuel efficient Pratt & Whitney Canada PW124 powerplants of 1,864 kW (2,500 hp) each, driving six-bladed Dowty Rotol propellers. 213 Fokker 50/60 were built.

This page lists all films that feature the Fokker 50/60.