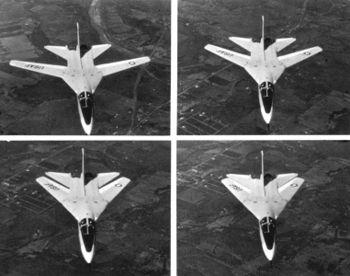 The General Dynamics F-111 "Aardvark" was a medium-range interdictor and tactical strike aircraft that also fills the roles of strategic bomber, reconnaissance, and electronic warfare in its various versions. Developed in the 1960s by General Dynamics, it first entered service in 1967 with the United States Air Force. The Royal Australian Air Force (RAAF) also ordered the type and began operating F-111Cs in 1973. The F-111 pioneered several technologies for production aircraft, including variable-sweep wings, afterburning turbofan engines, and automated terrain-following radar for low-level, high-speed flight. Its design influenced later variable-sweep wing aircraft, and some of its advanced features have since become commonplace. USAF F-111 variants were retired in the 1990s with the F-111Fs retired in 1996 and EF-111s retired in 1998. The RAAF was the last operator of the F-111, with its aircraft serving until December 2010.

This page lists all films that feature a variation of the General Dynamics F-111 Aardvark.