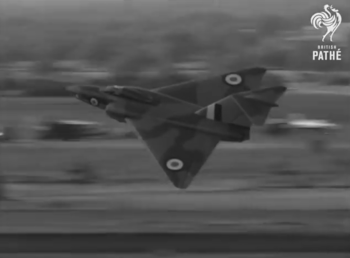 The Gloster Javelin was a twin-engined all-weather interceptor aircraft that served with Britain's Royal Air Force in the late 1950s and most of the 1960s. It was a T-tailed delta-wing aircraft designed for night and all-weather operations and was the last aircraft design to bear the Gloster name. It was succeeded in the interceptor role by the supersonic English Electric Lightning. 436 were built.

The Javelin was the RAF's first purpose-built interceptor aircraft. Major aerodynamic features of the type included its adoption of the then-new delta wing and a large tailplane. Both the aircraft's fuel and armaments were housed in the delta wing while the engines and crew were contained within the fuselage, The delta wing and tailplane combination had been deemed necessary by Gloster for effective maneuverability at high speed and for the aircraft to maintain controllability at low landing speeds. In one instance during testing, when both elevators had been torn off by elevator flutter, the Javelin remained controllable in part due to the aerodynamic qualities of the large tailplane used. Changes from the prototypes included alterations to the rear fuselage and lengthened engine jet exhausts to eliminate buffeting of the rudder by the jet exhaust, and increased sweepback of the wing's leading edge to improve high-speed handling.

This page lists all films, TV series, and video games that feature the Gloster Javelin.