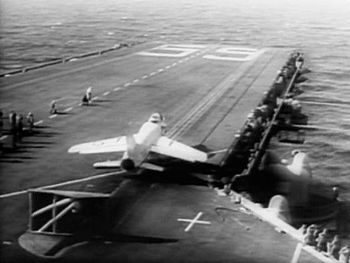 The Grumman F11F/F-11 Tiger was the first supersonic, single-seat carrier-based United States Navy fighter aircraft in operation during the 1950s and 1960s. Originally designated the F11F Tiger in April 1955 under the pre-1962 Navy designation system, it was redesignated as F-11 Tiger under the 1962 United States Tri-Service aircraft designation system. The F11F/F-11 was used by the Blue Angels flight team from 1957 to 1969. Grumman Aircraft Corporation made about 200 Tigers, with last delivered 23 January 1959.

This page lists all films that feature the Grumman F-11 Tiger.