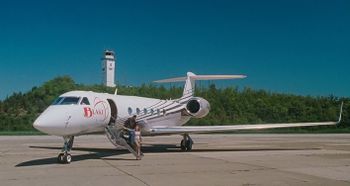 The Gulfstream V was one of the first "ultra-long range" (~6,000 nautical miles) business aircraft. Capable of carrying up to 16 people in standard seating configurations, and able to fly up to 6,500 nautical miles (7,480 miles, 12,038 km), the G-V became the longest range business jet ever made (at the time of its introduction). Total production of the Gulfstream V was 191 aircraft . A military version named C-37 was available and operated by several air forces in the world. A variant of the Gulfstream V, the G550 was released to the market in 2003, and has increased performance. Range is increased to 6,750 nautical miles (12,500 km), mostly due to reductions in aerodynamic drag. The Gulfstream G550 has the longest flight range in its class. More than 182 Gulfstream G550 aircraft have been produced as of 2008 whilst a modernised version replacing the original G-V, the G550, is also in production

This page lists all films that feature a variation of the Gulfstream V.

The following 46 pages are in this category, out of 46 total.