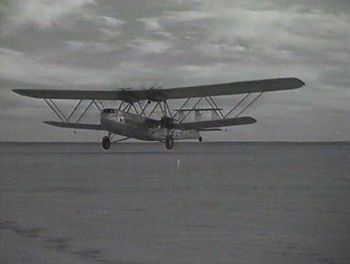 The Handley Page H.P.42 and H.P.45 were British four-engine long-range biplane airliners designed to a 1928 Imperial Airways specification by Handley Page.The H.P.42/45 were the land-based airliners of Imperial Airways and along with the airline's later flying boats are well remembered. Eight aircraft were built, four of each type; all were named, with names beginning with the letter "H". One was destroyed in an airship hangar fire in 1937 but the remainder survived to be impressed into Royal Air Force service at the outbreak of the Second World War. No lives were lost in civilian service (a record thought to be unique for contemporary aircraft) but by 1940, all had been destroyed.

This page lists all films that feature a variation of the Handley Page H.P.42 .